Since i started using smartphones ( my first being the Nokia 5320 ), i have always faced one big problem while traveling long distances, the battery drains too soon. It can be attributed to various factors like constant hunting for signals, continuous music playback .. etc.

I travel mostly by train here, in India. The travel usually lasts more than 10 hours, so my companion, when bored, is music,games and movies. Till now, i have always depleted a full charge in my phone while on travel. I was preparing for another journey and this time i had an iPod for company along with my phone. So, i was looking for a complete solution and MobileFun had this :

This is the Pama Plug n Go Power portable charger.

What is this exactly ?

To put it simply, this is a portable battery that can charge devices. You can correlate this to the UPS of desktop PCs, but portable. If you can’t comprehend what BS i am blabbering, read on ! 😉

The battery type is Lithium ion, like all the cellphone batteries. The capacity of the battery is 4000mA, which is quite hefty. It can hold nearly three times my N8’s battery capacity, meaning i can charge my N8 at least three times on a full charge of Pama, or can I ? You ll get to know that soon. The battery charges itself and discharges to the devices like any other battery. Here are the input and output ports :

The USB port is used for the output and the DC in is used for the input. More on functionality later, let’s take a tour of other aspects of this gadget. The Battery is switchable, here is that fiddly plasticky switch that enables the battery to do so :

When the switch is flipped to ON, the Pama logo glows in a bright blue color, like this :

This is the only indicator that says the device is ON. On the other side, we have the battery level indicator. It lets us know how much charge is left on the 4000 mA battery. It also glows in blue, but does not stay always on, we need to manually activate it by pressing a button on the left side of the gadget.

That’s all as far as the main device is concerned. The device should communicate with the to-be-charged device or the power outlet through some wire right ? Here is that chord :

Here’s where the dual functionality of the chord comes into play. The USB out socket i showed you earlier is where the USB male docks in, the other end being a normal pin that is very commonly used in power adapters, this is one functionality that allows the Pama to connect and charge other devices. The second functionality is to charge itself, the DC male pin docks into the DC in on the device, while the USB is connected to either the PC or any USB power adapter to charge the battery.

Let’s see in detail about the first functionality : Charging other devices

The USB chord (male) is connected to the USB out socket on the device like this : 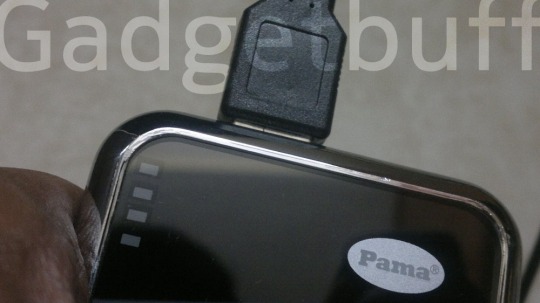 The other end, i.e the DC pin is connected to a compatible adapter (provided in-box) : 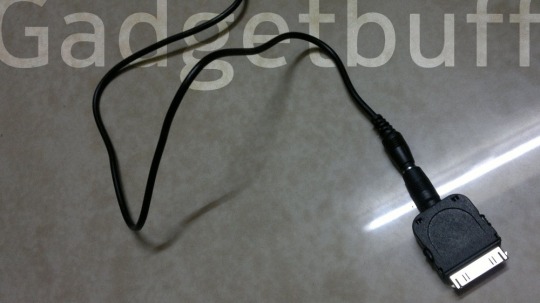 The device is then connected for charging like this : 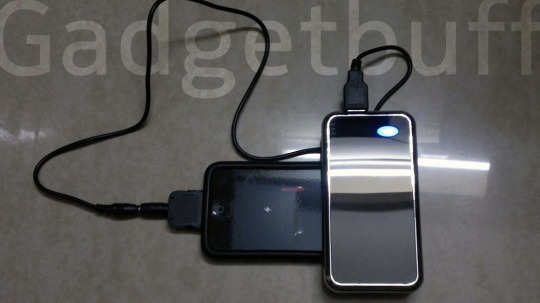 Simple,eh ? A wide range of adapters provide all kinds of connectivity options for various models. Here’s a pic of all the pins that come with the box, try to find your own device’s compatible pin, i am sure it’s there 😉

Now that you have seen what the main functionality : Charging other devices looks like, we can now move on to see how it charges itself.

The DC in acts as the input now, the other side of the cable is connected to my PC. The red circle LED light indicates that the device is in charging state, it will turn to green when the charging is done.

You can get this from MobileFun  at a cool 30.95 pound sterling. I am sure many of your droids want this badly, so go ahead, take a look and let me know in the comments, if you have any doubts.

Oh, are you one of the millions of Galaxy S2 users ? You might want to check this out – Samsung Galaxy S2 Chargers

Samsung announces the next wave of Bada phones